Best Time To List Your Home for Sale? Early May

For home buyers, it may feel like the best time to beat the competition to home shopping season has gotten earlier and earlier. But for sellers, the best time to list has remained remarkably consistent: Once again, U.S. homes listed for sale on Zillow in the first half of May sold faster and for more money than the average listing throughout the year.

Nationwide, homes listed for sale between May 1 and May 15 tended to sell for about 0.7 percent more (or roughly $1,600 on the typical U.S. home) and about six days faster than usual. And while the exact best time to list a home varies from market-to-market, in most cases the magic window falls squarely in spring.

The best time to list varies by metro area, but not by much. In 29 of the 35 large markets analyzed, the magic two-week window fell between the second half of March and first half of June. In the remaining six markets – Charlotte, Dallas, Houston, Las Vegas, Miami and Tampa – it’s the first half of July.

The largest price boost in any particular half-month period came in Minneapolis-St. Paul, where early May is optimal. Homes listed during that time frame in the Twin Cities area sell for about 1.8 percent more ($4,900 on the median local home). San Jose, Calif., and Chicago also saw their biggest boosts in early May, of about 1.5 percent in each metro area ($18,900 and $3,300, respectively). The sweet spot for listing comes a bit later in Seattle and Columbus, Ohio, where early June listings typically experience a 1.5 percent premium ($7,500 and $2,900 respectively).

The two-week magic window doesn’t just mean more money – it also can mean a faster sale. And when time is money, the benefits of listing at the right time are even greater. In Cleveland, homes listed for sale in the area’s early-May magic window sell almost two weeks faster (13 days) than an average listing throughout the year, the most time savings of any of the markets analyzed.

The magic of Saturdays

If you want to get even more strategic about when to list, it can pay to consider what day of the week will get your home seen by the most house hunters.

Saturday listings get the largest number of views by Zillow users in the first week of listing nationally and in 12 of the largest 35 metros. Friday is a great day to list as well, with homes listed that day getting the most views within a week in 10 of the top 35 markets. At the other extreme, Tuesday is worst time to list, nationally. Saturday listings end up with about 20 percent more page views in their first seven days on the market than Tuesday listings.

The image below is for New York, please follow this link for more areas: Average boost to final sale price 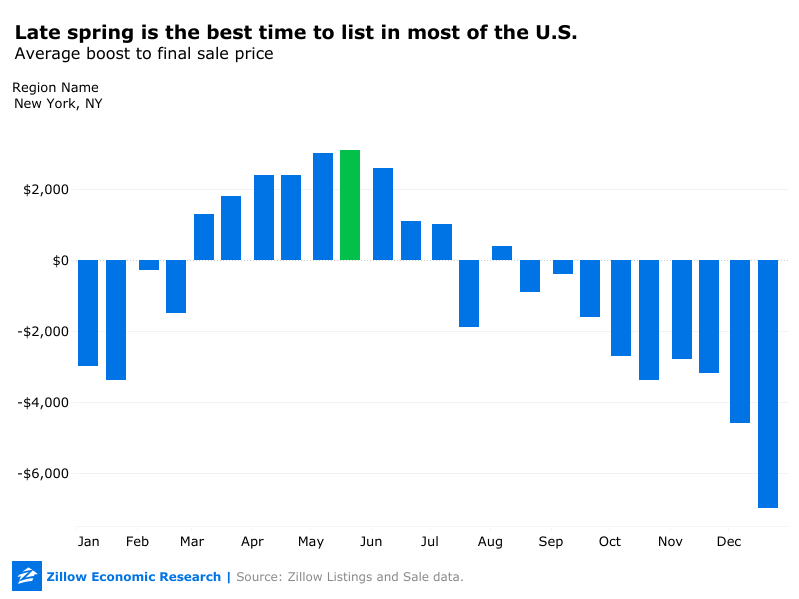